It is located in the endorheic alluvial fan of the Murghab river of the ancient Margiana oasis, Karakum desert. By 2000 BCE, Margiana had the culture that used the irrigation agriculture and construction of large fortified building complexes. One of the main Margiana center was Gonur Depe. Greek-Russian archeologist V. Sarianidi discovered Gonur Depe in 1950. In 1970, he started the excavation works there. It became the largest known of all settlements in the former delta of Murghab river delta, around 60 km from present day Mary town, in Karakum desert. It is known as the capital of Margush country (Persian name). The center of local civilization of oases in the Pre-Zoroastrian period. The excavations revealed the area of Gonur around 55 hectares, dated 2400-1600 BCE

Gonur North – the main fortified complex, around 330 X 460 meter, with Monumental Palace, Temple of Fire, Temple of Water, Temple of Sacrificing and ritual areas. Next is an area known as Royal Necropolis and two major and several smaller water reservoirs, dated between 2400-1900 BCE

A large necropolis, with more than three thousand graves of different type and dating, encompasses an area of around 10 hectares, some 200 m west of Gonur North

The excavations revealed the facts of an evident connection of Margiana with Indus Valley and Mesopotamia Civilizations. The artifacts prove the interconnection of people, cultures, ancient technologies and craftsmanship. The art objects and its iconography witness the migration of goods, materials, ideas and beliefs. In the same time, it testifies the creation of the local culture, style and technics

The most abundant ruins of cities in Central Asia, dated from VI century BCE until XVIII century CE. More than 2000 years of Merv distinguished history in Khorasan region, is accounted by its strategic position on the Great Trade Routes. Since the end of the 5th century BCE Merv area had become the urban center of the oasis. It has the unusual pattern of urban development as a consecutive series of cities gradually developed on adjacent virgin land zones. These extensive remains offered a unique opportunity to record the varying plans of the cities, as their walls define its size and general layout, gateways, principal roads, some buildings and the courses of main canals. All these near the surface having the time cultural levels as per city

The citadel of Erk Kala is the first city of Merv, was founded in the 6th century BCE. The foundation have coincided with arrival of Achaemenian Persians or possibly their predecessors, the Medes. It is very massive oval hill; with large mud -brick walls stand some 30 m high and an area of 20 hectares. From the end of the 4th century BCE, Merv is part of Alexander the Great Empire and citadel of Erk-kala become known as Alexandria in Margiana

Gyaur Kala is the second city of Merv and Metropolis of Margiana oasis. It was founded by Antiochus (281-261 BCE) and was known as Antiochia in Margiana. Erk-kala became the citadel of the Hellenistic city. Gyaur-kala was occupied around a thousand years, through the Seleucid, Parthian, Sasanian periods and into Islamic period. There lived together Zoroastrian, Buddhist and Christian communities of the Nestorian Church. Merv also hosted a Jewish community, as has been shown by Jewish headstones. Found also the traces of Manichaeism at the necropolis outside of Gyaur-kala

In the 8th century the suburbs of Gyaur Kala started to play important role in trade. During the Seljuk period, the suburbs finally transformed into new metropolis of Merv, known as Marv-ash-Shahijan (Royal Merv- Sultan-kala). The city was walled only in 11th century. Sultan Malik Shah is credited with building of the great wall round the city 12,300 paces in circuit. Sultan Sanjar enlarged the city, with the north and the south extensions. It became some 630 hectares. This was the capital of Seljuk state and one of the most important cultural centers of the eastern Muslim world. The greatest Merv’s glory, only finished in 1221 by the arrival of the Mongols. The Seljuk sultans Toghril, Alp-Arslan, Malik Shah and Sultan Sanjar were buried there. It was home for a number of outstanding medieval scholars, including Omar Khayyam 11th century, Yakut al-Khamavi 13th century, who were attracted by Merv’s famous libraries and observatory

In 1409, Timurid ruler Shah Rukh built a new city Abdullah Khan-kala, some 3 km to the south from the remains Sultan –kala. It was much smaller city than the earlier cities of Merv, occupying 1 square km. The reduced size of Timurid Merv show the decline of the oasis at this time, reflecting both its loss of status to centers such as Samarkand and Herat and the effects on overland trade of the increased maritime routes

Finally, in 18th century starts the history of Bayram Ali, with the small city of Bayram Ali Khan Kala. The traces of its walls can be seen near the modern Bayram Ali town

Distance Mary - Gonur Depe 60km, but it is old asphalt bumpy roads and sand tracks in the desert. Minimum 5 hrs for the road + visits 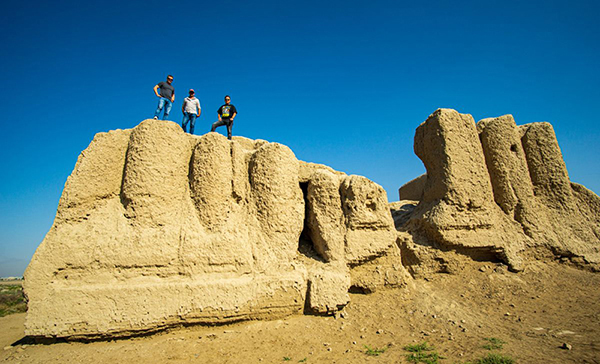